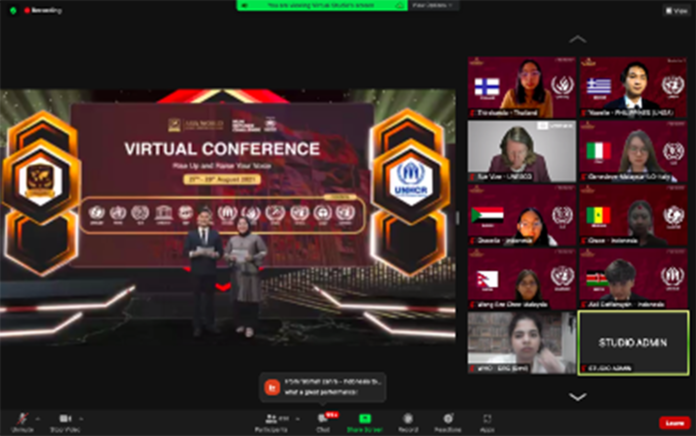 Model United Nations is a simulation of the United Nations assembly or meeting where the delegates will discuss specific global issues in their allocated country and council. It is an opportunity that hones the delegate’s public speaking skills, critical thinking, diplomatic skills, Leadership, and Networking skills in an international setting and perspective.

Over 28,000 applicants worldwide for the AWMUN virtual conference; however, only 1000 deserving applicants (where Sedano, Gumabay, Pagulayan, and Cabasal qualified) were selected as delegates for the actual conference. The selected and screened delegates were assigned to ten (10) different UN councils with a particular topic to discuss; hence, each delegate was assigned a country allocation by the organizers that they represented in character during the committee sessions.

Mr. Sedano represented the Hellenic Republic of Greece in the United Nations General Assembly (UNGA) council, which addressed the Global Arms Embargo Against Myanmar, while Ms. Gumabay stood as the delegate of the Federal Republic of Nigeria under UNICEF, where they discussed about the improvement of educational quality in terms of digitalization and strengthening and revising the educational curriculum. Mr. Pagulayan, on the other hand, represented the Oriental Republic of Uruguay in the International Criminal Police Organization (INTERPOL) council, where they debated over the issue of Combating people smuggling and trafficking. Moreover, Ms. Cabasal was assigned to represent the Republic of Panama, under World Health Organization (WHO) council, having the topic of Eliminating and Preventing HIV Transmission in Underdeveloped Countries.

Before the conference, the delegates attended a MUN101 workshop where they were tasked to write a position paper – which they submitted prior to the convention. They were also coached to construct a Working Paper and Draft Resolution which were debated and voted upon in the committee sessions of each council. The 3-day virtual conference concluded with a graduation and a Cultural Immersion.